FitWHEY is the combination of whey protein concentrate and whey protein isolate, with superior absorption, assisting the muscle recovery process.

Supplementing protein to the body.

Whey protein isolates and concentrates are considered proteins of high biological value, and thus are easily absorbed by the body, since they are formed by peptides (smaller molecules). They are consideres proteins with functional properties, due to their numerous components with beneficial effects, such as lactoferrin, beta lactoglobulin, alpha-lactalbumin, glycomacropeptides, which have a high immunological functionality. They are also considered important antioxidant, antihypertensive, antitumoral, hypoglycemic (glycemic control), antiviral and antibactericidal agents. Responsible for that is their ability to convert the amino acid cysteine to glutathione, which is a potent intracellular antioxidant.-. Each serving of the product provides 33% of the amount of protein needed daily, considering the average intake level of the general population.

Cocoa is a nutrient extremely rich in flavonoids, which are the most abundant polyphenols in our diet. Studies show thatthese substances are considered potent antioxidants, cardiovascular guardians and antitumoral agents, as well as protector of the central nervous system.

– Cardioprotective activity: the risk of cardiovascular diseases diminish when antioxidant supplements are used, since treatment with these compounds favor a significant decrease in the incidence of coronary events, minimizing the risk of myocardial infarct and stroke.

Very high selenium content. Studies show that the daily consumption of one Brazilian nut for six months recover normal selenium levels in the organism. Selenium is a key component related to enzymatic antioxidant, anti-inflammatory and metabolic activity of thyroid hormones, important for the proper functioning of the body.

It is recommended to dilute 2 (two) measures (40g) of FitWHEY in 200ml of water or beverage of your choice. Consume after training or according professional guidance. 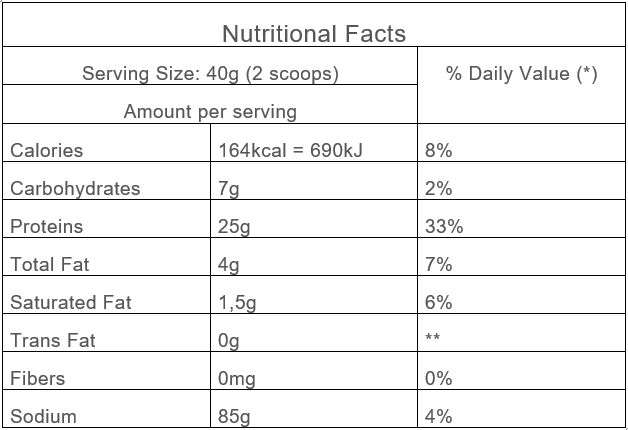